The Link Between Depression and Addiction

It is difficult to find an example of someone who shares their recovery story who does not cite a form of mental illness as being a part of what led up to their substance abuse.  In the Behavioral Health world, these are referred to as co-occurring disorders.  In the recovery world, we simply refer to them as poor coping skills.

Depression (major depressive disorder) is a common and serious medical illness that negatively affects how you feel, the way you think and how you act.  Fortunately, it is also treatable. Depression causes feelings of sadness and/or a loss of interest in activities once enjoyed. It can lead to a variety of emotional and physical problems and can decrease a person’s ability to function at work and at home.

Depression symptoms can vary from mild to severe and can include:

Symptoms must last at least two weeks for a diagnosis of depression.

Also, medical conditions (e.g., thyroid problems, a brain tumor or vitamin deficiency) can mimic symptoms of depression so it is important to rule out general medical causes.

Depression can affect anyone—even a person who appears to live in relatively ideal circumstances. Several factors can play a role in depression:

Why is dealing with depression so difficult?

Depression drains your energy, hope, and drive, making it difficult to take the steps that will help you to feel better. Sometimes, just thinking about the things you should do to feel better, like exercising or spending time with friends, can seem exhausting or impossible to put into action.

It’s the Catch-22 of depression recovery: The things that help the most are the things that are the most difficult to do. There is a big difference, however, between something that’s difficult and something that’s impossible. While recovering from depression isn’t quick or easy, you do have more control than you realize—even if your depression is severe and stubbornly persistent. The key is to start small and build from there. You may not have much energy, but by drawing on all your reserves, you should have enough to take a walk around the block or pick up the phone to call a loved one, for example.

Taking the first step is always the hardest. But going for a walk or getting up and dancing to your favorite music, for example, is something you can do right now. And it can substantially boost your mood and energy for several hours—long enough to put a second recovery step into action, such as preparing a mood-boosting meal or arranging to meet an old friend. By taking the following small but positive steps day by day, you’ll soon lift the heavy fog of depression and find yourself feeling happier, healthier, and more hopeful again.

Depression can lead people to:

Alcohol and substances often become part of a vicious circle for people with depression. It is very common for people who are feeling depressed to reach for alcohol in a bid to lift their mood. 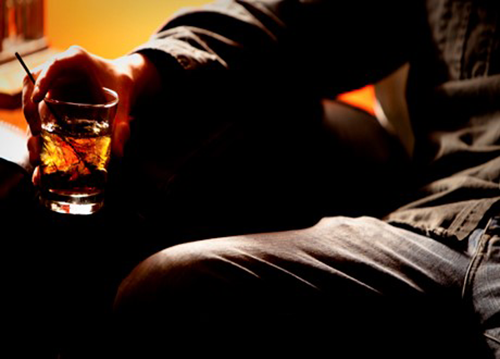 Drinking more, smoking more and taking more drugs are all common symptoms of people who are dealing with depression. Some people find they don’t want to eat, but others will overeat.

It’s an illness that causes you to reach for comfort and, in the case of alcohol and drugs, a way to feel better or seem ok to others.

Unfortunately, the comedown from alcohol and drugs often makes depression worse and replicates the symptoms of it. The physical sensations of hangovers – and the remorse and guilt that often go together with them – can make things seem even more bleak.

People who are alcohol or drug dependent often fear trying to live without substances as a survival crutch, which is why, as part of recovery, it is so vital to unpick the things that led to addiction and find new coping mechanisms.

Outpatient and inpatient addiction treatment centers will ensure that as well as helping someone to stop abusing substances they also work through and consider any underlying factors such as depression. Addiction treatment is an opportunity to get the intense support and time out needed to face these really challenging issues and ensure the future is more positive than the past has been.